Teams are all the rage today. We have executive teams and sales teams, product development teams and cross-functional teams. Most teams, however, are not teams at all but mere committees. Not only do these groups waste precious time and energy, but they miss the powerful synergy that real teams achieve. Here’s why your team is just committee and what you can do about it.

1. Your team is just a committee because the people on it don’t really know each other

Team effectiveness is based on trust. Everything flows from there. Committees don’t take the time to build that trust, they jump right into agendas and action items irrespective of the people in the room. As a result the relationships at the table remain superficial and trust virtually nonexistent.

If a group of people is going to engage in solving serious problems–be they commercial, social, or even spiritual–that group must know each other, and know each other well. Depth of relationship forms the foundation for the building that will be built upon it. The taller the building, the deeper the foundation must be. To forge real teamwork you must take the time to forge real relationship. There is no shortcut to trust.

2. Your team is just a committee because it doesn’t fight fair (or at all)

When team members trust each other, they talk openly and frankly. Committee members passively listen to one or two people drone on and on, disagreeing with decisions made behind their backs. That’s not fighting fair. True teams actively participate in dialogue, discussion, and even debate without incrimination. Not really fighting, per se, but iron sharpening iron. By default, committees protect the status quo. Teams change the world.

3. Your team is just a committee because it’s overly dependent on the formal leader

Committees have chairmen, and women, whose job it is to schedule a meeting, call it to order, direct the agenda, and follow-up on decisions made. A committee is entirely dependent on the chair for its success. Teams may start in the same way, but very quickly transform themselves into something quite different, a dynamic small group that’s mutually accountable to one another for results. The formal leader, while present, doesn’t drive the agenda, but all the members of the team take full responsibly for success. In fact, the formal leader could step aside, and the team would keep functioning at high levels of productivity. Not so with a committee.

That’s why Patrick Lencioni has made this audacious claim about true teams, “Not finance. Not strategy. Not technology. It is teamwork that remains the ultimate competitive advantage, both because it is so powerful and so rare. A friend of mine, the founder of a company that grew to a billion dollars in annual revenue, best expressed the power of teamwork when he once told me, ‘If you could get all the people in an organization rowing in the same direction, you could dominate any industry, in any market, against any competition, any time.'”

Nail Your Next Presentation: Tell a Great Story

How to Delegate Delegation: 4 Steps to Success 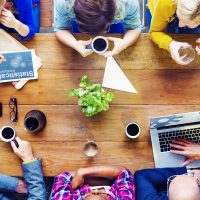 Stop! Before You Lead Your Next Meeting, Ask These Four Questions