If you’re like many of the clients I work with, you’re hitting the more button in a desperate attempt to get more sales.

But the more button isn’t working, is it? In fact, the more you push it, the less you seem to sell.

Deals fall through because of the high-pressure tactics your sellers use in emergency mode, loyal customers leave because they don’t experience the value they were promised, and top talent walks out the door in total frustration.

WHAT IF THERE WERE A BETTER WAY TO LEAD SALESPEOPLE?

BEING GREAT AT SALES DIDN’T MAKE ME A GREAT SALES LEADER.

I got my start in sales selling on-air advertising for a group of radio stations. I was the fastest account executive in my company to reach $250,000 in sales, and then the fastest to a million dollars in sales. I won contests, made lots of money, and had a ton of fun.

Then it happened. I became a sales manager, and my real education began.

Second, I discovered the team didn’t trust me either. My aggressive style that succeeded in the marketplace alienated the people on my team. I had some major bridge-building to do.

And, finally, I learned I didn’t know the first thing about coaching, the all-important skill for developing successful sales representatives. I talked too much and rarely listened. I hijacked calls and pressed my own agenda. I tried to be a sales superstar, ready and willing to close any deal at any time, and stunted the growth of every member of my team.

I was my own worst enemy, until I found a better way: leading salespeople from the inside-out.

AN APPROACH TO SALES LEADERSHIP THAT REALLY WORKS

Leading salespeople from the inside-out means starting with what motivates them (not you) and tying their sales activity into that motivation. Pressing the why button, not the more button.

Leading salespeople from the inside-out happens by working alongside them as a trusted coach and and mentor. It happens by helping them learn how to sell at the highest levels of excellence (instead of doing deals for them). When you lead this way, you empower your team to duplicate this process over and over again throughout the organization.

I use three simple words to describe this process:

My education on the job paid off. As head of sales, our team nearly doubled direct sales revenue. During this time, we received national recognition from the Radio Advertising Bureau for our contribution to the field of Non-Traditional Revenue development. Eventually, I became President and General Manager of the station group, and together we achieved repeated annual growth in the face of intense competition due to deregulation of the industry.

Along the way, we became a place where high performers wanted to work because of the culture we created. One by one, salespeople from other media companies joined our team, which, of course, generated even more revenue for the business.

I NOW HELP SALES MANAGERS LEAD THEIR SALESPEOPLE FROM THE INSIDE OUT.

Fifteen years ago, I transitioned from leading this station group to helping other sales organizations succeed in the world of sales as we had. I can do the same for you.

I’ll help you understand that an outside-in approach to sales management—the more button—doesn’t work. I’ll show you that by connecting deeply with your individual salespeople, you’ll light a spark in that person’s soul that will inspire them to give 100 percent effort 100 percent of the time.

I’ll teach you how to coach your salespeople to execute your sales process at the highest levels of excellence and repeat this dynamic within your sales organization over and over again.

Sales leadership from the inside-out follows these three essentials, each flowing from one to the other: 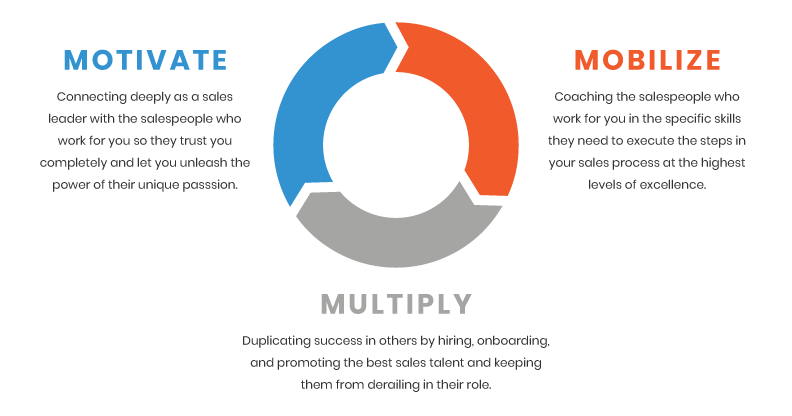 HOW TO WORK WITH BILL

You can work with me in a leadership development engagement to help you and your management team become more effective sales leaders. You can also work with me in a sales strategy initiative to help your sales organization have more focused impact on the marketplace. Here’s information on each:

The world needs you.

Learn how to lead from the inside out by subscribing to Bill Zipp’s weekly newsletter, Take the Lead. Delivered every Tuesday to your email inbox, each issue will show you how to lead yourself, lead others, and transform the organization you serve.

No advertising. No spam. No kidding!

Bill’s worked with hundreds of sales leaders around the world, from ADP to WebEx, Avalara to SAP Concur. Many of these companies experienced dramatic revenue growth while working with him, doubling and tripling annual sales. He has 20 plus years of experience with high-growth companies and agile startups, as well as established businesses stuck on a sales plateau.

Bill’s business background is in commercial radio where he was the fastest account executive in his company to reach one million dollars in sales. As head of sales, Bill’s team nearly doubled their direct sales revenue.

Eventually Bill became President and General Manager of the station group, and together with his team achieved repeated annual growth in the face of intense competition due to industry deregulation. In 2001 they were honored to receive national recognition from the Radio Advertising Bureau for their company’s contribution to the field of Non-Traditional Revenue development.

Bill lives in Corvallis, Oregon, home of Oregon State University and the beloved orange and black of the Oregon State Beavers. He’s married to Denise and has three amazing adult children: Beckie, Ricky, and Renee.