“I don’t understand it,” this first-time CEO said to me, shaking his head in dismay.

“We have one of the best products on the market, and sales at first were strong. But now it’s become a disaster.”

He explained to me how his company had grown rapidly in the last year, hiring more people than ever before and promoting others into management positions. They had invested heavily in this expansion and leveraged much of the assets of the company to do so.

Then nothing. Or next to nothing for their return on investment.

So he did the typical things. Spent more money on marketing. Pushed the sales force even harder. Held a company-wide “come to Jesus” meeting. Still no improvement.

Meeting with me was almost a last resort. And while I’ve built my professional reputation  helping small and mid-size companies get turned around through more productive sales and marketing, that’s never my starting point. My starting point is The Leadership-Profit Chain.

Yes, we all want more sales. And we all want our business revenue to grow year after year. But that outcome is the result of a series of events that begin elsewhere.

This first-time CEO misinterpreted his early sales success. After an initial experience with the company, new customers never came back and didn’t recommended them to family and friends. The reason sales didn’t scale was simple: their encounter with his employees was so lackluster, they concluded, “Why bother?”

The employees at this company were good people, but the environment was toxic. Inexperienced leaders, under pressure to perform, managed their direct reports through manipulation and intimidation. Praise was as rare as a sunny day in Seattle. Distrust and disrespect was rampant.

What was happening? The company had grown beyond its internal leadership capacity and was imploding as a result. The Leadership-Profit Chain in reverse.

The Leadership-Profit Chain is a term coined by The Ken Blanchard Companies for the link their researchers found between leaders, employees, customers, and profit. Here’s how it works:

Leaders who build trusting relationships with their people and communicate with them in a positive, productive way, create a climate within a company that’s a joy to be a part of. And when employees love the place where they work, they bring their whole self to the party, giving 100% effort 100% of the time.

What’s important to understand about the process, however, is this: as nice as it is to be voted a great place to work in whatever poll, the business benefit is even better.

Employees who are fully engaged connect with customers in such a way that those customers become evangelists in the marketplace, dramatically increasing sales and rapidly growing revenue. It’s the domino effect for business.

The Domino Effect for Business

When this domino drops, the next dominoes fall in line, moving your company forward to achieve its goals. In fact, I’ve found that almost nothing is impossible for an organization committed to developing leaders who lead their people in this way.

Now you’re ready for sales and marketing strategies that are a natural extension of who you are as a company, rather than the smoke and mirrors so many businesses employ to convince people to buy from them.

The Superman Syndrome: A Recipe for Leadership Ruin

The Myth and Misfortunes of Heroic Leadership 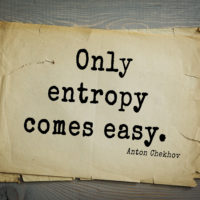 Organizational Entropy and Its Antidote: Leadership

Three Zones of Leadership: Which One Are You In?