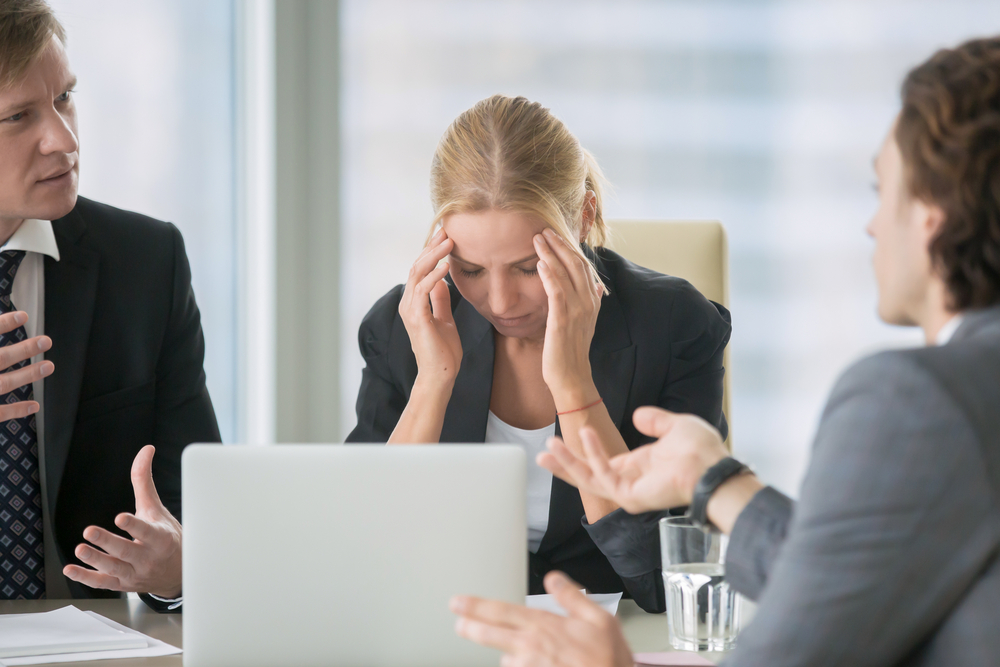 I have a love-hate relationship with meetings.

When a meeting goes well, there’s nothing better on the face of the earth. Ideas are generated, innovations discovered, people are energized, and the business moves forward.

A great meeting is a thing of beauty.

Just the opposite is true when a meeting does not go well. You can taste the tension in the air, like drinking sour milk. Everyone seizes up and so does any possibility of creative communication. People start planning their escape, if only in their mind.

What causes meetings like this? The following five collaboration killers. I’ve witnessed everyone of these from leaders who should know better (much better) in meetings behaving badly. They are:

The first collaboration killer is distraction. It’s the most ubiquitous of bad meeting behaviors and should not be tolerated under any circumstances. You’ve seen, and done, these things: checking your smartphone for text messages, using your laptop to take notes but reading your email instead, answering a phone call in the middle of a meeting.

Distractions like these destroy meeting effectiveness because the human mind can’t do two things at once. What we refer to as multitasking is not multitasking at all but task switching.

“When we think we are multitasking, our brains are actually moving from one thing to the next, and our performance degrades for each new task we add to the mix. Multitasking gives us a neurological high so we think we are doing better and better, when actually we are doing worse and worse,” MIT professor Sherry Turkle writes in Reclaiming Conversation.

Task switching is okay if the tasks we’re doing are unimportant, like folding laundry and watching TV. We can always rewind a show and review what we missed. You can’t do that in a meeting, and what we miss—not just words but powerful emotional cues—can be monumental.

Your meetings should be device and distraction free zones, so everyone can give their full attention to them. Start on time and end on time, so sticklers for time management don’t feel like their day is wasting away. If a meeting goes for more that 75 minutes, have a 10 minute technology break (Make sure to start on time after the break). If notes need to be taken for a meeting, use an executive assistant not individual laptops, so people in the room can give issues under consideration their full and undivided attention.

Anyone who’s ever watched a courtroom drama knows what interrogation is. An aggressive lawyer gets up and grills a witness with question after question. In the end, the poor person is shredded to pieces, and the lawyer has won the day, not by making an assertion themselves but by questioning the credibility of the witness.

I’ve watched similar interrogations occur in many a business meeting. Not that asking questions is wrong, even tough, difficult questions. It’s the intent of the asking, however, that makes it bad meeting behavior.

The intent of an interrogation like the one described above is not to find the truth, but to make a point or to play gotcha. Its objective is to destroy the opposition without having to take a stand one’s self. That’s bad leadership, not to mention bad business.

Ask questions in your meetings. Tough, hard questions. But do so in a way that they can be answered. Take the time to prepare people for these questions by providing them prior to coming to the meeting. Make your aim as a leader to help everyone understand the issues at hand in the best way possible, not to win an argument by humiliating another human being or casting doubt regarding their credibility.

Leadership is about developing people into the best version of themselves. It’s not about beating your chest in public, trying to prove how smart you are. Use meetings to do the former and never do the latter.

Of all the bad meeting behaviors, this is the sneakiest: mischaracterization. Mischaracterization clothes itself in the active listening skill of reflection, but does so deceptively because it doesn’t accurately paraphrase what’s being said.

When you’re on the receiving end of mischaracterization, it feels good at first. Words like, “So what you’re saying is …” introduce the paraphrase, but what follows is a partial or complete misrepresentation of what you actually said. So you’re stuck defending yourself from someone who’s putting on a show of listening, but isn’t really listening or they would have correctly represented your point of view.

A twisted version of mischaracterization is taking something to its logical extreme. Any idea, especially one being formed in a discussion format, has a possible conclusion when pushed to its limits that doesn’t make sense.

For example, you may be proposing to better qualify incoming leads from trade shows because your sales team is wasting hours of their time running after people who filled out a form to win a large screen TV but have no interest in doing business with your firm. A logical extreme mischaracterization would go like this, “So what you’re saying is we should not offer a prize at all at our booth. Maybe you think we should stop going to trade shows entirely?”

No, that’s not what you’re saying. By misrepresenting it, this person forces you into a defensive mode rather than a collaborative one and poisons communication on this important topic.

Like asking good questions, restating what a person says is an active listening skill. Do it, however, in a way that seeks to truly understand another human being, not embarrass them.

This bad meeting behavior, grandstanding, is the exact opposite of mischaracterization. When grandstanding takes place, no attempt at active listening is being made. A person just locks and loads: talking on and on and on until they run out of gas, or someone cuts them off.

Grandstanders can appear righteous in their cause or claim to be protecting some historic virtue (I once sat through a 45 minute grandstand by the founder of an organization prior to a vote regarding its future. Guess which way the vote went?), but they kill collaboration. And when collaboration is killed, the death of the organization is not far behind.

Meeting communication thrives with bursts of sentences and phrases spontaneously exchanged by all the people in the room, with maybe the occasional paragraph or two. This dynamic is destroyed when pages or chapters of endless content is recounted.

You can prevent grandstanding before it happens by defining up front what it is and holding people to a strict standard of discussion etiquette. It’s trickier to cut someone off in public when they launch into a long-winded tale, but it can be done in a gracious way. Make sure, however, to follow up one-on-one with that person. Most grandstanders have no idea they’re doing it and need a little coaching to help them get better.

The final collaboration killer is stonewalling. As the term implies, stonewalling erects a barrier between one’s self and others that, like stone, is impenetrable to input. Stonewalling occurs in meetings when one or more members adamantly cling to their point of view, refusing to compromise in any way.

Corporate scandals of past decades would have been prevented by courageous stonewallers, so the practice is not bad in itself. It becomes bad when stonewalling is indiscriminate. That is, when the issue being clung to is not mission critical.

When meeting discussions do not involve the violation of a value or the breach of an ethical standard, then collaboration and compromise should be the law of the land. In this context, stonewallers are not brave corporate whistleblowers but inflexible, self-willed obstructionists.

Sure, have opinions. Hold those opinions passionately. I sure do. But don’t let them hold you. Allow others to challenge your opinions without getting combative or defensive and let a better option emerge as a result.

Meetings are a great opportunity for you as a leader to inspire your people and align them around the mission and vision of the organization. They’re also fertile ground for fresh ideas and exciting innovations.

Stop the distractions that interrupt your meetings and destroy their effectiveness. Teach people how to ask good questions—not as a way of catching someone in a mistake, but as a way of gaining understanding—and teach them how to reflect others’ point of view by accurately paraphrasing it back to them. Finally, for the sake of all, ask your grandstanders to talk less—a lot less—and learn how to have a real, dynamic, interactive communication where iron sharpens iron.

In other words, stop hating your meetings and do the things that will make the people in them, including you, love them again.