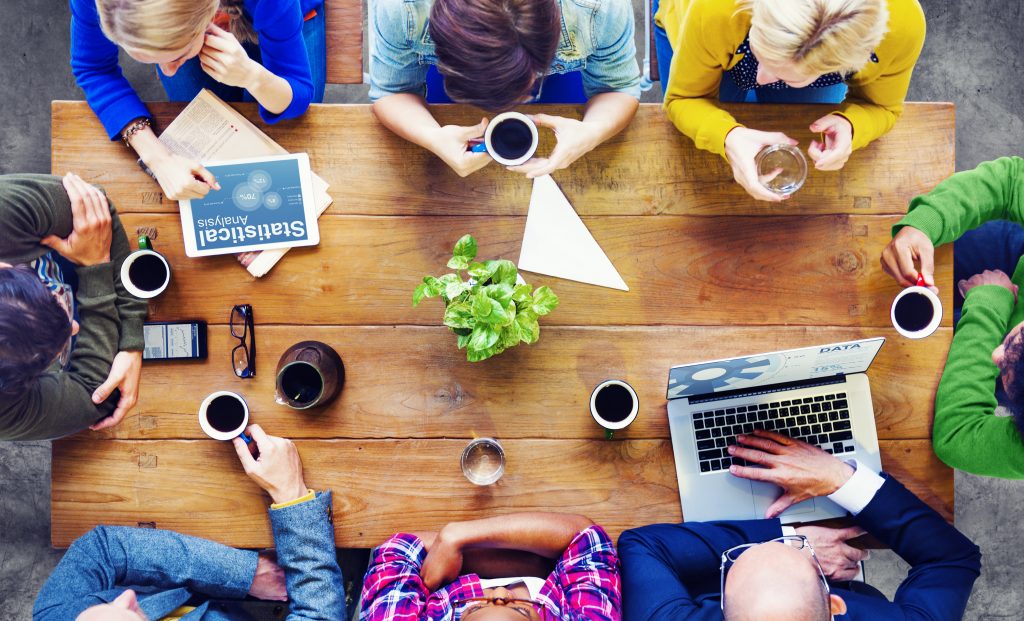 Stop! Before You Lead Your Next Meeting, Ask These Four Questions

If you’re an executive who leads within a corporate context, however, meetings are an inseparable part of your life. Making them matter is critical to your success. Before you lead your next meeting, ask–and answer–these four questions:

1.  What’s the purpose of this meeting?

One of the easiest things in the world to do today is schedule a meeting. Technology facilitates this process extraordinarily well, allowing us to place a meeting on the calendar, set endless recurrences, and send invites to the entire universe.

As much as I love all things digital, this is not a good development.

Your calendar needs to be a sacred space. Every meeting that lands on it takes you away from getting things done. Attending a meeting is one of those things that looks like work, but may not actually be work. Successful executives don’t confuse activity with accomplishment and only allow those things in their life that allow them to achieve their goals.

We’ve all heard the phrase time is money, but that’s simply not true. Time is more valuable than money. If you waste money, you can earn more. Not so with time. If you think you’ll need more money in the future, you can save it up for later. Not so with time.

Time, not money, is your most limited business resource. Treat is as such as a leader and spend it on those things—and only those things—that move you closer to achieving your goals. And that means guarding your calendar courageously.

Should we eliminate meetings entirely? Absolutely not! But we must submit them to the same rigorous standards we submit our financials to: is the purpose of this expense (meeting) aligned with our highest priorities? Will it help us achieve that which matters most? If not, don’t meet. 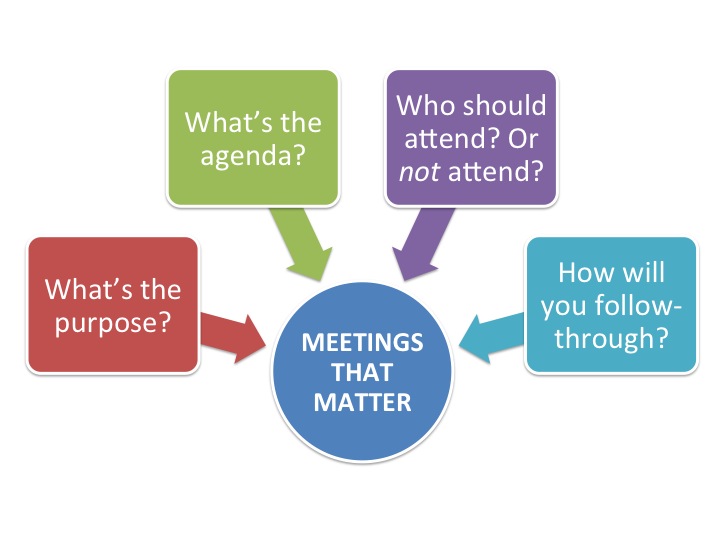 2. What’s the agenda for this meeting?

Okay, so you’ve determined that a meeting could actually occur, but you still haven’t determined if it should. Why? The next step in making meetings matter is crafting a meaningful agenda for a meeting.

A meeting should never take place unless the organizer of the meeting has clearly outlined what will be addressed in it. No exceptions. By thinking the agenda through beforehand, you’ll discover whether you even need to meet at all.

In other words: Are there enough items to warrant a meeting? Do the items on the agenda move you closer to achieving the goals of the group? And is a meeting even the best way to address these items?

Meetings cost money. At minimum is the cost of each attendee’s time plus the cost of the time spent getting to and from the meeting, getting ready for the meeting, and the opportunity cost of being away from your customers and employees while you’re in a meeting, plus the cost of the room, the technology, supplies, and refreshments. On and on it goes. Over the course of the year, the cost of meetings extends into the hundreds of thousands of dollars. This cost warrants calculating the return on the investment you’ll get from every meeting.

So follow this simple rule: no agenda, no meeting.

3. Are the right people in this meeting?

One of my first consulting projects was an assignment from hell. I was asked by a company that built microprocessors to audit the workplace culture of a plant that was being built. Construction was way behind schedule and over budget, as two contracting firms had been fired, the latest for stealing materials from the job site and selling them back to the company.

I conducted hours of interviews and gave them my recommendations. In spite of the glaring shortfalls, the number one complaint from nearly every employee was this: meetings.

Too many meetings that went too long, had no point to them and achieved nothing. And the worst part? Everyone in the unit was required to attend every meeting, whether the items on the agenda were related to them or not.

When I gave the recommendation that only those people who needed to be at a meeting should attend a meeting—ironically, at a meeting everyone was required to attend—I received applause from the group. That’s never happened before or since.

Make meetings matter as a leader by asking this simple question: who really needs to be at this meeting? Who do the items of the agenda impact directly?

4.  How will you capture and keep the commitments of this meeting?

Most meetings end like a gun fight in an old-fashioned western. Final shots are fired and a big cloud of dust appears. A few bodies lie strewn across the landscape, while everyone else scampers off to the next gun fight. Keep this from happening to you by putting a system in place that captures the commitments of your meeting and ensure that they get done.

Your best friends in this process are the three W’s. Here’s how to use them: Wrap up every meeting you lead five minutes before its scheduled ending point. Review the actions items discussed in the meeting and make sure that each action item is defined by Who is going to do What by When.

As simple as this sounds, I encounter very few leaders who employ this fundamental meeting discipline. Most meetings end with no one knowing the commitments decided on in the meeting and the person who’s responsible for completing them, let alone when they’ll be completed. What a waste!

Now, when you start your next meeting with this group of people, don’t jump into new business. Follow through with these action item by reviewing the three W’s from the last meeting. Do this in all your meetings and you’ll quickly build a culture of accountability and become known as a leader who’s serious about execution.

“Follow-through is the cornerstone of execution, and every leader who’s good at executing follows though religiously,” states Larry Bossidy and Ram Charan in Execution: The Discipline of Getting Things Done.

John Anner has led not one but two successful organizations. The first, a for-profit company he started with only a few hundred bucks, is the Independent Press Association. This start-up grew to a multimillion dollar enterprise in a very competitive marketplace.

“The most useful thing I’ve ever done in any organization is train the staff on how to have efficient meetings,” Anner says in the brilliant book 168 Hours: You Have More Time Than You Think by Laura Vanderkam.

What are his rules for meetings?

No one goes to a meeting who doesn’t need to be there. Every meeting has an agenda. At the beginning of the meeting, the meeting leader spells out the goals for the meeting; and at the end of the meeting the participants go back through the agenda to review what needs to get done before the next meeting. Meetings in his organization are short, sharply focus affairs that begin on time and end on time.

By increasing meeting efficiency, Anner says, “It gives me at least ten extra hours a week.”