In an act of unimaginable stupidity, I signed up to run the half-marathon last year on the first Sunday of October.

For those of you who do not know me well, I took up the sport of long distance running at the ripe age of 53. Since that time, I’ve run in lots of 5K and 10K races, placed in the top of my age group in some of them, lost over 50 pounds, and gotten into the best shape of my adult life.

So it seemed like a good idea at the time to try out a new distance: 13.1 miles. And it seemed like a good day to do it too, with the sun beaming bright in a big blue sky as I and 25,000 of my new best friends crossed the starting line in downtown Portland, ran alongside the lovely Willamette River, and returned back to downtown again.

My massive mistakes, however, began immediately, the effects of which were not to be felt in full until later in the race. In short, I took off too fast. I know, I know, every running book in the world warns you against that mistake—and in my head I was holding back—but not enough.

I completed my first six miles in the time I normally run a 10K, and completed the next three miles in similar fashion. I felt great and was dreaming of half-marathon glory.

And then mile 10 hit me like a ton of bricks. My legs felt like lead and my back was searing in pain. The bigger problem, however, was that mile 10 was followed by an even more difficult mile 11, followed by two of the most painful miles of my entire life.

I’ll never forget the words race officials said to me as I crossed the finish line, “Are you okay, sir?” True story. I was asked that question a half dozen more times as I staggered through the post-race recovery area.

Since then, I’ve had a chance to reflect on this experience and offer the following lessons for life and leadership:

A 5K is 3.1 miles. A 10K, 6.2 miles. Neither are a walk in the park. But a half-marathon and a marathon, 13.1 miles and 26.2 miles respectively, are a different race entirely. Mostly because completing one requires you to be on your feet running, not for minutes, but for hours at a time. The fastest marathoners in the world finish the distance in just over two hours, and amateurs like myself are lucky to do it in twice that.

The sheer time and distance of these longer races must be respected. So, too, the marketplace.

We read rags to riches stories of people working out of their garage hitting it big overnight and assume that success comes easy. It doesn’t. Beneath those stories is a more complex tale of hard work, repeated failure, and enduring passion. That’s what it takes to succeed in the marketplace today, and to assume differently is to come into it without the proper degree of respect.

We need not fear the marketplace, nor any competitor, for I’m convinced that sound strategy and hard work wins. But neither should we take them lightly either. This is why successful professional sports teams approach every opponent they face seriously. For the minute you think that you’ll have an easy time of it, is the minute you’re primed for an upset.

2. Set the Right Pace and Stick to It

There’s a fine line between ambition and achievability. Too much ambition, and you’ll burn out; not enough, and you’ll rust out. Both ways you’re out.

Pacing in a half-marathon is the same. Go out too fast, and you hit the wall like I did long before the race is done. Don’t run fast enough, however, and you’ll never achieve your personal best. Run too slow in business, and you’ll get passed by more committed competitors and lose the race entirely.

That’s why it’s so important to find that perfect pace, the one that pushes you hard enough to win, but not too hard to wear you out.

Forgive me for mixing my metaphors, but here’s the perfect picture of this balance between ambition and achievability. The strings on a violin all have tension applied to them. Too little tension, however, and there’s not much sound when the bow comes in contact with them; too much and the strings snap. Finding that sweet spot in between is the secret to the violin being its very best and making beautiful music.

3. Have a Plan for Refueling

For those of you who know a bit about the science of distance running, you’ll recognize the experience I went through in my first half-marathon as glycogen depletion.

For physically fit adults, glycogen depletion takes place after about 90 minutes of rigorous exercise as the body’s stores of natural sugars are expended. This, then, is followed by sudden fatigue and loss of energy. Without replenishing its glycogen, the body has a difficult time taking even one more step, a phenomenon that’s called “hitting the wall,” or, perhaps, more colorfully, “bonking.”

And, yes, all marathon and half-marathon events have hydration stations along the course, which I didn’t utilize. Mostly because I didn’t train with a hydration station every few miles, so I didn’t quite know how to use them. But even if I did, by the time I realized I needed refueling, it was way, way too late to do anything about it.

And that’s the leadership lesson from this particular mistake. Don’t run—that is, lead—without taking care of yourself. It’s not being soft or selfish or whatever else the voice inside your head is telling you. It’s just being wise. Get the refueling you need to run your race well.

Before you start the day, take the time for emotional, physical, and spiritual nutrition, so you enter into it healthy and strong. Take regular breaks during the day to remain strong. These breaks don’t need to be anything longer than a quick five minutes of quiet between meetings. Then end your day enjoying the people you love the most: family and friends. More refueling.

When I recovered from my half-marathon stupor, I immediately signed up to run the race again next year. Yes, call me crazy, but I refuse to let my mistakes define me. This time, however, I’ll enter the race with a healthy respect for the distance, run it at the right pace, refuel well, and strive to achieve my personal best.

I’ll let you know how it goes! 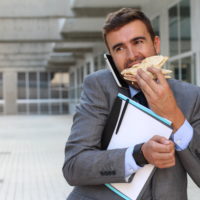 My Most Costly Multitasking Mistake … Almost!

Life and Death and the Meaning of Work

Yes, You Are Your First Priority