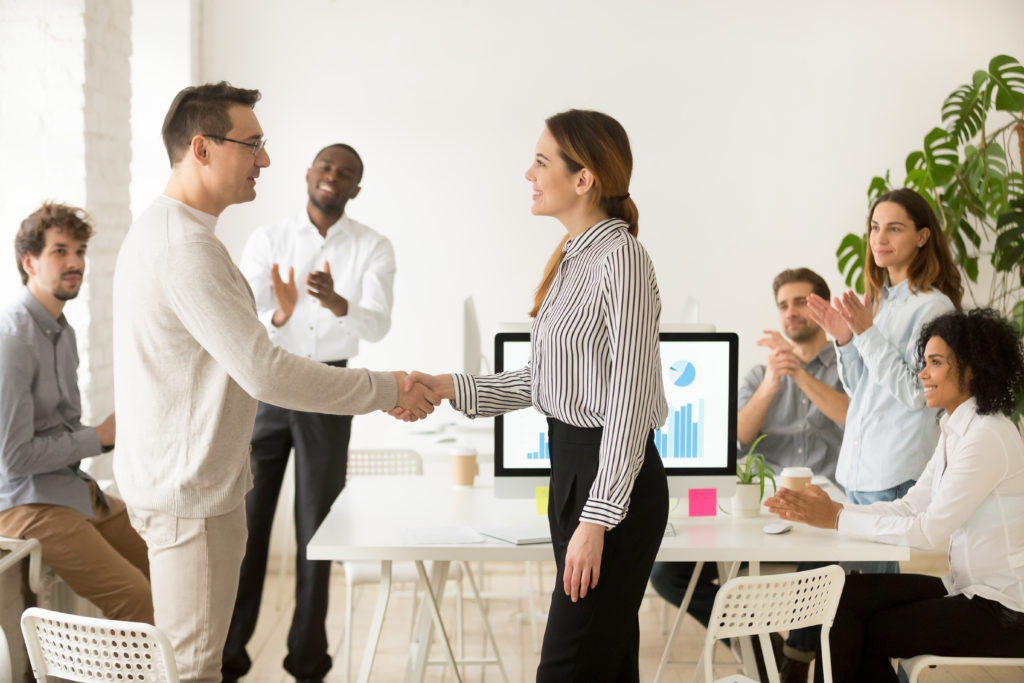 The Sales Persona, The Sales Profession, and The Power of Positive Praise

The salespeople who work for you are different than any other kind of employee. I know I’m stating the obvious, but it must be said anyway.

In addition, the sales profession is different than any other profession. Again, stating the obvious, but we tend to minimize these differences when it comes to leading the sales side of the business. Especially when it comes to understanding the role positive praise has in motivating salespeople to do their best work.

Most salespeople are wired for praise because of their tendency to extroversion. As I’m sure you know, the terms extroversion and introversion don’t refer to being shy or outgoing. Rather, these terms refer to how a person gets their energy that, in turn, drives shy or outgoing behavior.

I’m an extrovert. I get my energy from being in front of groups, the larger the better, and being with people, the more the merrier. My wife is an introvert, and while she, like me, spends a majority of her time professionally teaching and coaching others, it doesn’t give her energy like it does me.I can’t get enough of the limelight. The limelight exhausts her. So after a full day of teaching, she wants to sit quietly on the couch and vegetate. I want to go to a party. We get our energy from two totally different sources, one from inside of our self and the other from outside of our self, and act differently as a result.

Again, most salespeople, not all but most, get their energy from outside of themselves and need consistent positive praise–external energy–to do their best work. This is the sales persona. An engineer, for instance, does not have the same persona. In fact, a constant flow of positive praise is likely to exhaust most engineers, who would prefer to be left alone in silence. 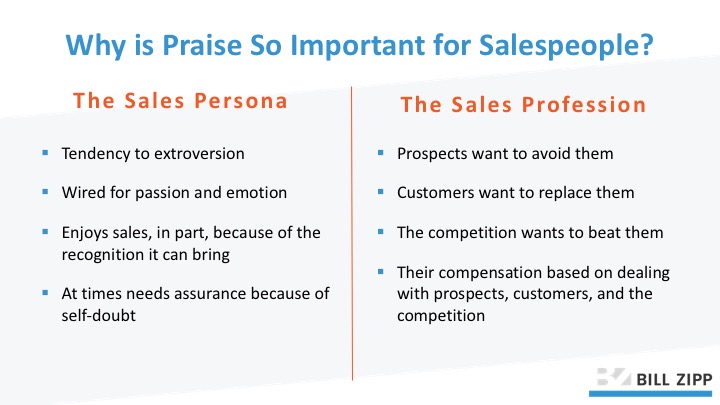 The sales profession is also wired for praise, not just the sales persona. Salespeople call on prospects who want to avoid them and customers who want to replace them (or at least get a better deal from them). They do their work against aggressive competitors who want to beat them and earn their compensation, either whole or in part, from the commission they receive from dealing with these prospects, customers, and competitors on a daily basis.

Sales is like riding a bicycle … uphill … with the wind in your face. It’s hard work. Positive praise is like having a sales leader riding beside you and cheering you on. It’s what gives you inspiration to get up the hill and win the race.

Here are two secrets to make praise work for you, motivating the salespeople who work for you to be their very best.

Secret One: Positive Praise is Specific

You’re a sales leader, so you know the difference between a goal and a wish. A wish says merely, “Increase sales this year.” Stated in this generic, non-specific manner, you know top line revenue isn’t likely to change in any meaningful way. State it differently, however, and you’ve got a fighting chance, “Increase sales 25% over last year by closing $250,000 of new business by the end of each quarter.”

A goal is not a goal unless it specifically states exactly what you’re going to do. Praise is the same. Generic atta boy’s, empty thank you’s, and meaningless slaps on the back aren’t praise at all. They’re empty words that won’t motivate your people in any significant way. Perhaps, even, produce just the opposite: rolled eyes and sideways sneers.

When you open your mouth to affirm your salespeople, do so with clarity and thoughtfulness. Don’t just say, “Great job,” but say, “Great job getting an appointment with that prospect. He’s been impossible to nail down and you did it. Terrific work!”

Don’t just say, “Thank you,” but say, “Thank you for being willing to jump in and help with implementation on the new account. I know that was above and beyond the call of duty, but it saved the day for us.”

Yes, I know, the second part of each of the paragraphs above require more time and attention, but the return you’ll get from each is more than worth it. Much more!

The second secret to using positive praise as an effective tool in motivating your salespeople is personalizing it. This secret, like the one before, asks you to leave the land of empty platitudes and surface backslapping and get to know how each of the reps who work for you is wired.

Some salespeople distrust statements that are made in public, doubting by default the speaker’s motives; others thrive them (As in, it’s only praise if it’s said in public for everyone to hear.). Some salespeople read every note, card, and email you send them; others toss written communication in the trash, preferring to be spoken to face-to-face. Some salespeople only want business to be business and never talk about their private life at work; others post the pictures of family members, their pets, and their neighbor’s pets all around their cubicle.

Positive praise is specific and positive praise is personalized. It’s also very powerful in motivating the salespeople who work for you to give 100% effort, 100% of the time and help you crush your number all the time.

MORE: The Real Power of Positive Praise: A True Story