I was working with a client recently putting the final touches on a quarterly sales contest he was conducting with his team. We noticed from past quarterly contests that his people started well and ended well, but in-between they needed extra motivation. So we added a few fun twists for weeks five, six, seven, and eight. Then he said words to this effect, “You know, before we did these things I’d have a good first month to the year and a good last month to the year and ten months of mediocrity.”

And that’s the genius of quarterly sprints. One year is too long a period of time to sustain people’s attention and enthusiasm, one month too short a period of time to make progress on meaningful goals. So I encourage the clients I work with to break the year into a series of three-month sprints. By having four starting gates and four finish lines in your year instead of just one, you harness the enthusiasm of starting something new and the energy of finishing something significant all throughout the year, instead of just at the beginning and the end. This sustained intensity assures the completion of goals that are critical to your success.

I just finished writing my third book a result of a quarterly sprint. Completing this project was one of my goals for the year, but I scheduled it as a summer sprint with a Labor Day deadline. This tight, twelve-week time frame gave me an intensity of focus that a whole year couldn’t. The sprint was most useful about halfway through the project. I got distracted, derailed by a family vacation and a bit stuck creatively. But because the finish line was literally a few weeks away, I sat myself down and got back to the business of writing. Sure enough, my juices began to flow again, and I hit the deadline as planned.

Most business leaders I’ve met have no lack of meaningful goals they want to achieve in any given year. They don’t achieve those goals, however, because they fail to execute on them. I’ve found that the rhythm of a 12-week sprint with a 1-week rest (13 weeks equaling one quarter) is a more effective way to get things done than one long 52-week marathon. I pretty sure you will too. 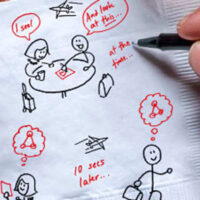 Selling Across the Chasm: Venture, Value, and Volume

How in the World Do You Find Good Salespeople?

The One Question NEVER to Ask in Sales

Why the Best Salespeople Don’t Work for You