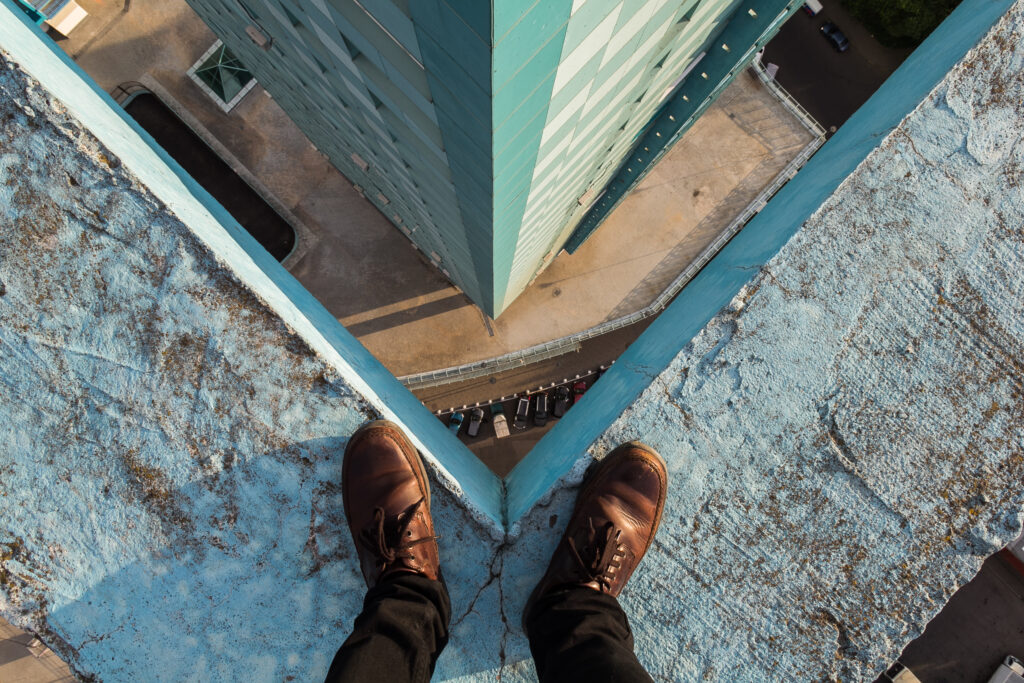 Why Should Anyone Trust You as a Leader? The Truth about Trust

I’m standing atop a tall building. We walked past the “Danger” and “No Public Access” signs—written in red with big, bold letters—ignoring them like playground children.

My feet feel the hard edge of the rooftop line, below me open air.

And then I wake up.

The meaning of this dream, I’m sure, lies buried in some obscure childhood experience (The flying monkeys in The Wizard of Oz perhaps? They really creeped me out.). I never jump. I always wake up with “Trust me” echoing in my brain.

The Truth about Trust

Are you asking your people to do the same?

You’ll get the same results. Inaction.

Trust, of course, is the cornerstone of leadership. No one will do anything for you if you say to them, “Don’t trust me.” But trust is earned over time, not given wantonly. That’s the truth about trust. The way leaders earn it is by embodying three things in full: character, competence, and chemistry. Or what I call the Trust Triad.

At the base of the Trust Triad is character. It’s at the base, foundational in force, for a reason. It’s here trust begins. If you, as a leader, can’t be trusted as a person, nothing else matters. Character means that you’re a person of your word: you do what you say you’ll do. It means your people can depend on you and you’d never ask them to do something you wouldn’t do yourself (like jumping off a building, a bridge, or a cliff). And character means that you act this way when things are going well and when things are going poorly, when you’re having a good day and when you’re having a bad one. 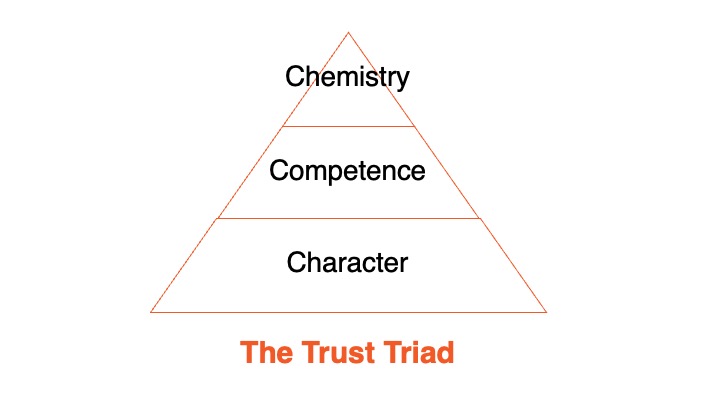 Hall of Fame basketball coach John Wooden once wrote, “The true test of a man’s character is what he does when no one’s watching.” Wise words from the Wizard of Westwood. That’s the point, isn’t it? Character is not dependent on the public eye to perform. It acts consistent with its core values, even in private.

But character isn’t enough. We’ve all worked with someone about whom we could say, “He’s a helluva guy, but just doesn’t get stuff done.”

Is that person you?

Don’t let it be. In addition to unquestioned character become a person of unparalleled competence, a person who gets stuff done. Done well. Done completely. Done on time.

Competence has to do with your professional responsibilities and how fully you embrace them. It’s born from a commitment to master the demands of your job, not for ego or self-glorification, but to maximize your influence with others. It’s the platform, so to speak, you stand on to be heard. Being good at what you do leads to increased fellowship. Without exception.

If you’re choosing a doctor to perform open heart surgery, you want someone whom won’t advise a drastic procedure like this unless it was absolutely necessary and won’t add expensive extras to pad profit. But you also want a doctor who won’t accidentally nick an artery and leave you dying on the operating table. In other words, you want someone you can trust, both in their personal character and their professional competence.

People want both in their leaders as well.

The final side of the Trust Triad is chemistry. A squishy word, to be sure, compared to character and competence. But don’t be fooled by its squishiness, it isn’t easy to pull off.

What I mean by chemistry is the ability of a leader to connect with people and spark a relationship. This happens in an instant. A warm smile, a firm handshake, eye contact, and a quick compliment come together to make one powerful chemical compound: human.

A leader who stands aloof, a leader who laughs at others but never at himself, a leader who’s alway busy, bothered, and burdened, won’t be leading for very long. Like a doctor with bad bedside manner, people will go elsewhere.

“But I’m not a people person,” you say. That’s fine if you’re an individual contributor working in an isolated cubicle (maybe). But the minute you took on management responsibilities, you took on the mantle of leadership and the mandate to connect with people. It’s not an option now. Ignore it at your peril.

That doesn’t mean, however, you must become a backslapping extrovert. That rare breed of person who never met a stranger and never forgets a name. Most of us are not that person (Thank God). Each of us connect with people in our own unique way. The important thing is to be true to that voice, comfortable in our skin. It’s authenticity like this the causes people to trust us, again, in an instant.

And that, too, is the truth about trust.