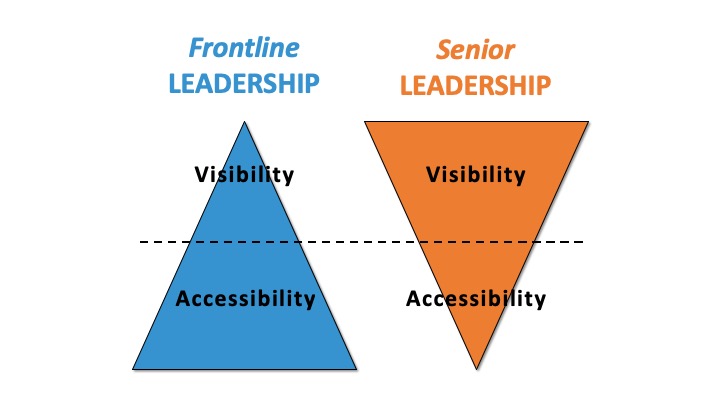 Everyone you follow these days, from business gurus to corporate executives, talks about the importance of organizational culture.

And rightly so, for as the great Peter Drucker once declared, “Culture eats strategy for breakfast!”

I realized, however, in reviewing my writing on culture, that I’ve failed to address one very important reason why culture is so critically important: the dynamics of visibility and accessibility.

As a result, culture isn’t really on your radar because the closeness of the relationships you have with your reps is your culture. There’s an esprit de corps that drives everything you do, without your having to say a word. Culture is created through the power of your personal presence. This is good … Very good!

What’s not so good about this, however, is due to that up-close-and-personal accessibility, you have limited visibility within the organization. Because your day-to-day responsibilities involve running a sales team, you spend little time positioning yourself in the wider organization. In fact, very few people in your company really know who you are.

That is, however, until you have a successful year or two. Then you’re tapped for senior leadership. You move from managing one sales team of eight reps to four sales teams of eight reps, each with a manager of their own.

Guess what happened? Visibility and accessibility just flipped, as illustrated in the diagram below:

Because visibility and accessibility flipped, so did any possibility of the organic duplication of the culture you created when you were a frontline sales manager. Why? Because now you’re leading 36 people, not 8. The power of your personal presence is spread too thin to have any meaningful impact. Your new visibility in the organization as a senior leader—as cool as it is—comes at the cost of accessibility. And most certainly, unless you learn how to do it differently, at the cost of culture as well.

What’s the answer? Intentional culture creation. What happened almost unconsciously in your intense frontline relationships must now happen deliberately, consciously within your entire sphere of influence.

Here’s how to create a winning sales culture:

The first fundamental for a winning sales culture is the nature of the relationships in it. In short, how sales leaders and sales representatives view and treat one another.

Note those words, in that order: view and treat. Many times we try to get people to treat others with respect without addressing how they think about that person or group of people. This is fatally flawed. Behavior flows from belief, how one acts is shaped by how one thinks. Respect begins between the ears, then finds its external expression.

How do you think about your salespeople? Leaders who create a winning sales culture don’t view their sales staff as interchangeable parts, but as unique human beings worthy of dignity and respect. They see themselves as a first among equals, not higher or lower than the people they lead. They don’t assume the worst when things go wrong and believe the best in others.

Yes, I know, not everyone will live up to these high expectations. But most will, and that’s worth the risk for me in thinking this way about them. For those who don’t live up, I can look myself in the mirror and know that I believed the best in them until they gave me no other alternative.

That’s how leaders who build a winning sales culture think. Here’s how they act. They speak with respect to the people who report them, never demeaning them outside of their presence or behind their back. They give others the credit they deserve, fully and completely, and accept blame themselves. And they insist others do as well.

Leaders building a winning sales culture correct with respect. When a salesperson makes a mistake, which most every salesperson finds a way to do, that conversation is conducted in private, not in public, refusing to humiliate this person in front of their peers. Conversely, when a sales leader makes a mistake, which most every sales leader finds a way to do, apologies are done in public, displaying the authenticity and vulnerability that engenders respect.

Respect is like offering someone a handshake. Only the rare individual will refuse to shake your hand. When you as a leader offer respect in the manner described above, your salespeople will respond to the gesture and give you respect in the return. Then they’ll reach out to others on your team and shake their hand as well. That’s how a winning sales culture is built, one handshake at a time.

Grit, true grit that is, has a formal definition. Not the one given by the 1969 movie where John Wayne won his only Academy Award, or by the recent Coen brothers’ remake. The grit young Mattie Ross found in the aging “Rooster” Cogburn was an ability to stand up to bad guys and shoot a gun. Important, maybe, in the wild, wild west, but not helpful for today’s business marketplace.

So Dr. Angela Duckworth and her research team at the University of Pennsylvania have performed an incredible service by giving us this succinct—and profoundly useful—definition. True grit is “perseverance and passion for long-term goals.” Grit is courage, not just in the moment but sustained over time, in the ongoing pursuit of challenging goals. And, according to research, it outperforms both talent and intelligence in activities as diverse and graduating from military school and competing in the National Spelling Bee.

Perseverance and passion for long term goals describes the sales role almost perfectly. Every year a sales person chases a number, their long term goal, and is compensated for actually hitting that number (or not). Then they do it again the next year. And the next. And the next.

You can hardwire perseverance and passion for long term goals in your salespeople by helping them believe in themselves. Contrary to popular opinion, however, believing in one’s self does not come from reciting positive platitudes over and over again (I am special! I am a success! I am a sales snowflake!). It comes from producing positive outcomes. True self-esteem flows from self-efficacy, the ability to act on one’s own behalf to achieve challenging goals.

So get rid of the pop culture psycho-babble that seeps into sales and get serious about actually helping people succeed. A hard-won deal is infinitely better for a person’s self-image than an inspirational poster or motivational quote. When you give your sellers the real help they need to win, along with the win you’ll get something even better: the confidence that comes from competence and the growth of a winning sales culture.

There’s an opposite set of emotions from the drive of grit and determination: a sense of fun and play. Yes, I know it’s an odd thing to say in the context of serious sales leadership, but fun and play are essential to creating a winning sales culture. Why? Because human emotions exist in an open-loop system.

Human emotions aren’t like that at all. They’re easily affected by outside influences. Negative emotions spread like a cold, making everyone sick and sour. Positive emotions do the same, but with opposite results. That’s why fun and play is an important business priority. It fans the flame of positive emotions and pours water on negative ones. It brings oxygen into the room and lets people breathe.

When I speak to a group of sales leaders, I can immediately tell how well they’re doing by the mood of the group. Is it tense? Troubled? Or do the leaders laugh readily, tease each other in good humor, and genuinely enjoy working together?

“Understanding the powerful role of emotions in the workplace sets the best leaders apart from the rest,” declares Daniel Goleman in Primal Leadership, “not just in tangibles such as better business results and the retention of top talent, but also in the all-important intangibles, such as higher morale, motivation, and commitment.”

How do you infuse a sense of play in your sales culture?

First, make fun of yourself. Let people laugh at you in a self-depreciating way. Be the punchline to your own jokes. Second, celebrate things that aren’t sales related: birthdays, graduations, St. Patrick’s Day, whatever. Find any stupid excuse to throw a party or have a cake. The stupider the better. Third, do things together. Fun things. Super fun things. The best team-building event I ever participated in was a WhirlyBall tournament after a leadership development day in downtown Chicago. Yes, WhirlyBall is a thing. Google it. It was awesome!

Yes, sometimes the oft-repeated injunctions of other people, even a consultant like myself, are actually true. Imagine that! And the repeated injunction to make corporate culture a top priority couldn’t be more true.

Simply stated, culture is the operating system at the heart of your sales operation. If you’re going to succeed in a senior leadership role, you can’t rely on the unconscious, organic way you built culture with your frontline sales team. You’ve got to do it more intentionally, more deliberatively, starting with mutual respect, developing drive and determination, and having a sense of fun and play in all that you do.